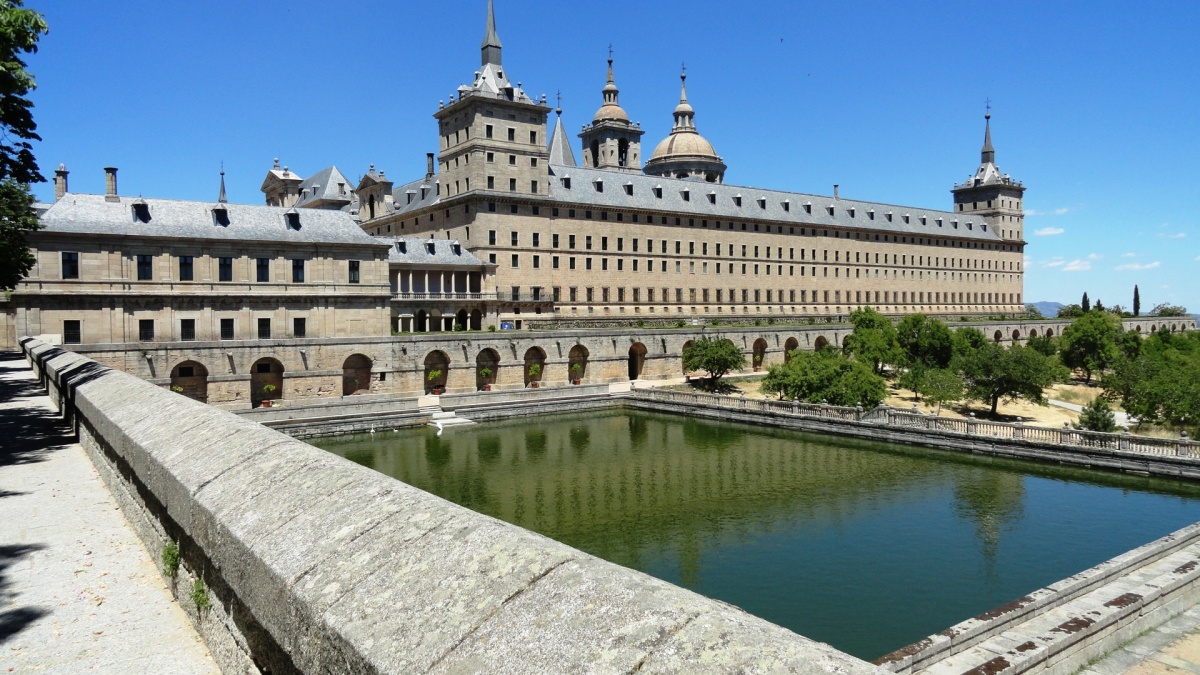 We planned to spend a week in Madrid. Unlike most people I was underwhelmed by Madrid. After a day, we decided to see what else was around and took day trips. Here are those Madrid Day Trips.

Our first day trip was to El Escorial. We took the C8A for €4.05. El Escorial is the last stop after a 45 minute ride.

I had no idea where to go when I got off the train. There was a bus waiting outside the train station. Everyone was getting on so I guressed that bus was going to the cool part – the monsatery – and I was right. Otherwise it’s a long (about 30 minutes) uphill walk to El Escorial.

San Lorenzo de El Escorial has been a royal palace and a monastery, and is the burial site of many of the Spanish kings.

Be sure to walk the well manicured gardens.

Walking the grounds is free. Admission inside the monastery is €10.

Aranjuez was a royal estate from 1560 to 1752, after which it was open to the public and grew into the city it is today.

We took the C3 for €4.05 and, in about 50 minutes, got off at the Aranjeuz stop. The palace is about 15 minutes from the train station.

Of all of our day trips, Aranjuez was our least favorite. But if you like royal palaces, then consider going.

Alcala de Henares is the home of Cervantes, and that is evident around town, including a big statue in the middle of the lovely town square.

I was pleasantly surprised by Alcala de Heneres and would go back again.

From the Madrid Chamartin station, we took a 90 minute train to Salamanca. It was a little pricey at €24.90, but it was worth it.

It was a 20 minute walk to Plaza Mayor.

From the Madrid Chamartin station, we took a 90 minute train to Avila. Compared to Salamanca’s ride taking the same amount of time, this train ride was only €8.90.

After a 15 minute walk we rounded a corner and…whoa…fairytale medieval city walls and gate.

I loved the walls of this town. Theyare the most complete walls in Spain, spanning a circumference of over 2500 meters and include 88 towers.

This town definitely made me feel like I was in medieval times.

From the Madrid Chamartin station, we took a 30 minute train to Segovia A.V. for €10.30. From there we had to take bus #11 for €2, which dropped us off at the magnificent Segovia aqeduct.

The 10 minute walk uphill had many enjoyable sights along the way. The Plaza Mayor was a little disappointing to me. However the Cathedral and Alcazar were worth the walk.

Admission to the Alcazar is €8.

From Madrid Atocha we spent €10.30 for the 30 minute train ride to Toledo.

Once you exit the train, you can take a bus, but if you walk, getting there is half the fun. First you cross a medieval bridge, then pass through a guard tower. Then you pass through a door in the medieval town wall, and walk up ancient steps. The entire walk takes about 20 minutes, concluding in the Zocodover, or town square.

While the Zocodover isn’t that exciting, it’s the beginning of your journey through the spectacular medieval streets and alleys.

And eventually to more spectacular treasures.

I liked Toledo so much I went back a second time. The second time I liked it even more, and saw so many things I missed on my first visit.

While I enjoyed the day trips immensely, if I could do it again, I would forego staying in Madrid and spend a night in these enchanting towns instead.

This site uses Akismet to reduce spam. Learn how your comment data is processed.